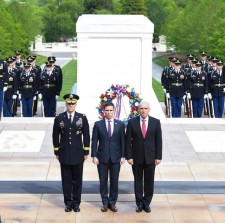 Brian Kinsella grew up in the farming town of Howell, New Jersey.  After the terrorists attacked on 9/11, he knew he had to answer the call to military service.

Brian joined the US Army and was immediately deployed as Captain and Detachment Commander to Baghdad, Iraq, for fifteen months during the surge in support of Operation Iraqi Freedom. Subsequently, he was Aide-de-Camp to the commanding officer of the 3rd Expeditionary Sustainment Command (XVIII Airborne Corps) in Operation Unified Response, Port-au-Prince, Haiti.  Additional assignments included Germany, Italy, and Fort Knox, Kentucky.

Just days before a deployment, a fellow soldier took his own life.  This event, along with an unsuccessful suicide attempt by one of his soldiers under his command, gave him another calling. As a result, Kinsella co-founded Stop Soldier Suicide (SSS) in 2010 and today serves as the Chairman of this nonprofit organization. The organization has created a national and community-based network of volunteers and partner organizations providing triage and alternative solutions for soldiers, veterans, and family members. SSS is also leading the awareness and outreach campaign to change the way soldiers and veterans think about mental health care and the stigma of receiving treatment.